by Nidhi Sharma
in Art & Craft, DIY, Jewellery, Tutorials
A A
0

How to make Beautiful loom bands

Here are some creative and simple tutorials on how to make a cute loom bands at home easily. We have your kids will love it. For step by step instructions please head over the links provided below. So let’s start.

1. Rainbow Loom Jewelry without the loom! 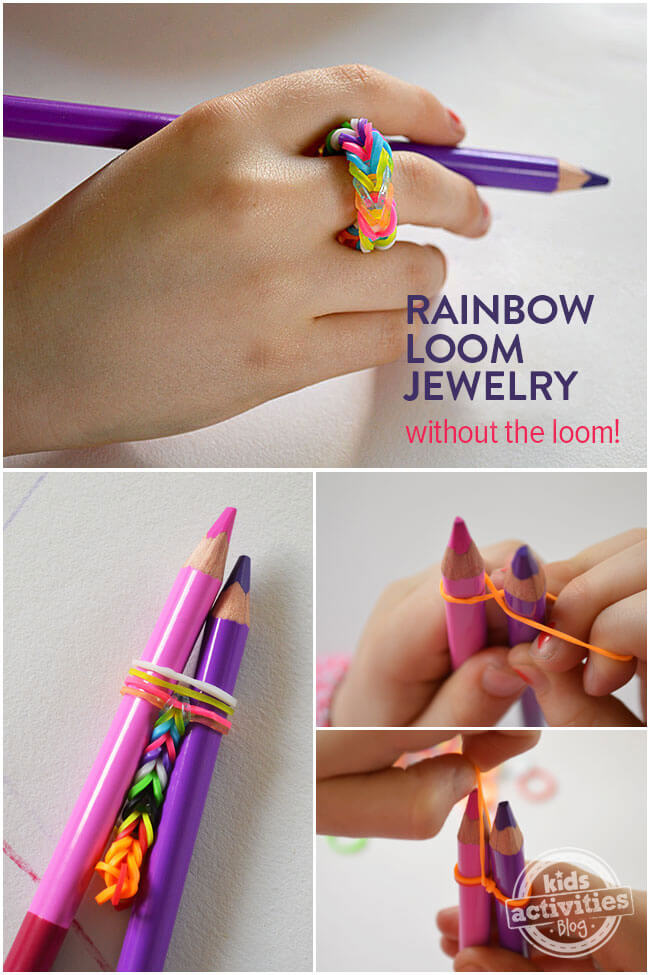 This is an easy to make craft with all those bright and beautiful rubber bands. This beautiful ring v=can be even made by using two normal lead pencils. All you would require is two similar pencils and lots of colorful loom bands. Start by widing a loom band across the pencils in a cross. Now by placing one loom band across the two pencils at first and then repeat with the second. Now take the first loom band and pull the ends over to the middle portion of the pencils. The loom band gets collected in the middle of the second and third loom band. Now place the fourth loom band and do the same with the second one. Repeat the steps until you get the required length for your ring. 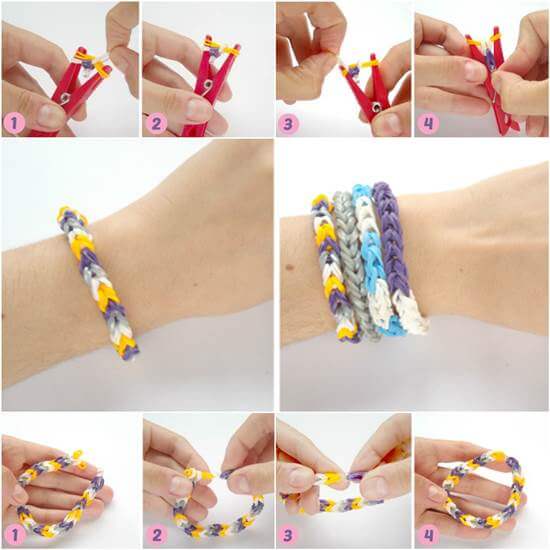 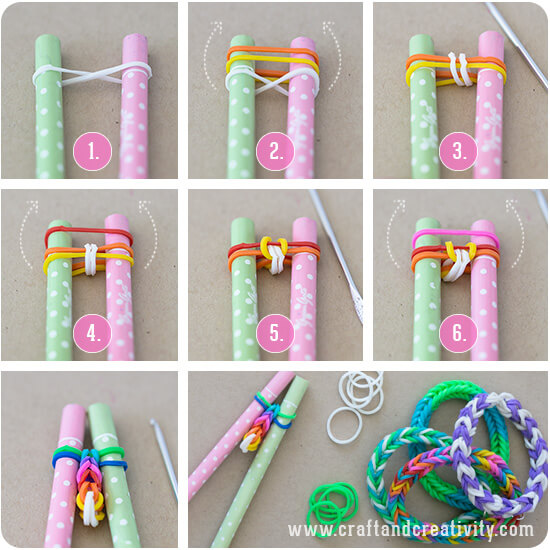 This is a very beautiful and easy craft. You can surely please all your friends through these loom band bracelets. Let us start making some colorful loom band bracelets. First of all take two pencils. Collect some loom bands. Now decide on the color scheme you wish to follow with the bracelet. Take the first loom band and cross it on the two pencils. Now place two more loom bands according to your color scheme. Now take the ends of the first loom band and drop them over the third. Now place the fourth loom band. Take the ends of the second loom band and drop it on the fourth. Go on doing the same procedure over and over again until you reach the optimum length for the bracelet. Now take a closure clip or hook to seal the two ends of the bracelet. 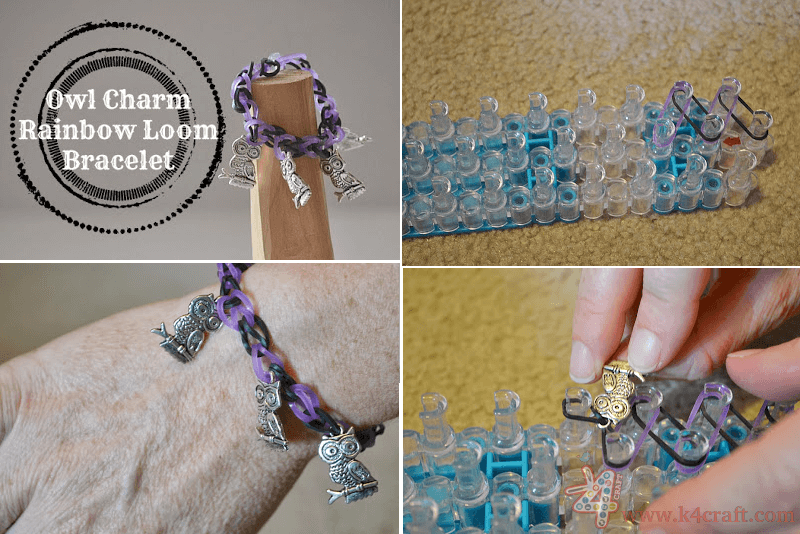 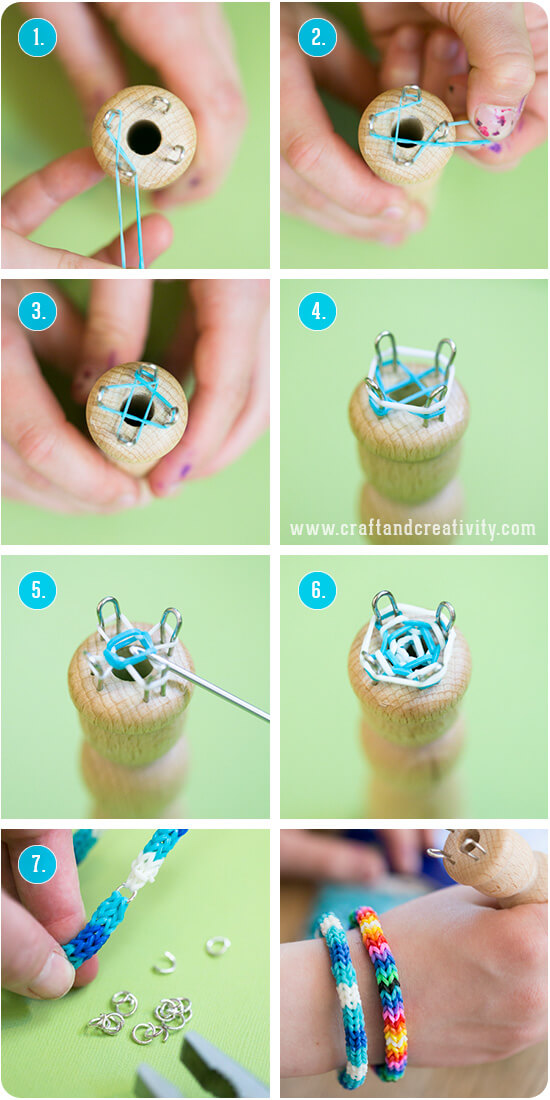 This is an easy to make and a unique loom band bracelet. This beautiful loom band bracelet can be made using a wooden loom station. This wooden loom station consiste of four metal loops and a wooden stick. Collect some colorful loom bands and start making the beautiful bracelet. First of all start with a single loom band and stretch it across all the four metal bases on the wooden stick. Criss-cross the loom band on the four bases. Now take a different colored loom band and stretch it on the outer edges of the four bases. Using the loom needle, release the lower loom band from the four bases, using the needle. Releade the lower loom band on top of the second. Repeat these steps until your reach the required length. Now use a metal closing clip to seal the ends of the bracelet.

The rattle fish loom band is a very unique loom band bracelet. This looks really cool. Start with an eight peg loom station and decide on the number of colours you want for the loom band. For the first loom band, place it on two across pegs, in a criss-cross manner. Now taking the both ends, using a loom hook, extend the ends to the other three pegs on one side and to the other two pegs on the other side. Now take two similar loom bands of same color and place the first band around thw six pegs in a rectangle and place the other loom band on the central two pegs. Now use your hook to release the lower bands on top of the upper loom band. Now take two loom bands of another color and place it in the same way and release the lower ends on top of the upper loom band. Repeat these steps until you get the optimum length of the loom band bracelet. To remove the loom band bracelet from the loom station, converge all the loops on a single peg. Pass a loom band through the six loops. Pull through a hook and now you have two loops each on both ends. Now place a closing clip to seal the bracelet.

We hope you liked these beautiful Designer colorful Loom band bracelets. Make these beautiful loom band bracelets for your kids, friends, etc. It will be a great addition to your friendship day. Share your experience with us in the comments section below. We will come up with more such content for you. Check out other related articles on K4craft. Keep smiling and creating with K4craft!