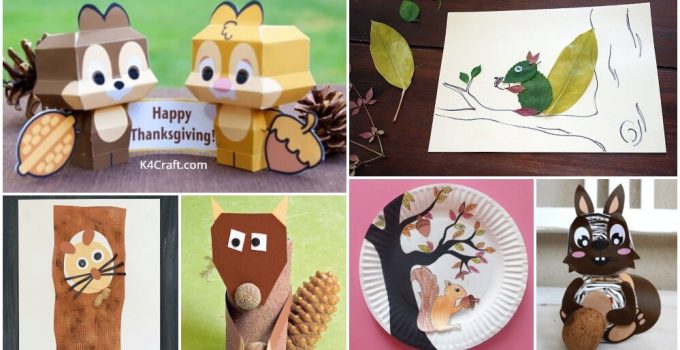 Squirrels are really sweet animals. They are really swift in their movement. It is really hard to touch a squirrel as it moves really fast. All the kids are fascinated by squirrels. Their bushy tails are a large source of curiosity. Often we have seen that kids love to play chasing the birds and the squirrels in the garden. It becomes a fascination of the kids to watch and play with these little creatures named squirrels. We have come up with some different kinds of squirrel games. We have collected some squirrel crafts which the kids can make and feel connected to these little creatures.

You may like: 27 Fun and Easy Fourth July Kids Crafts Ideas

This is an easy to make toilet paper roll squirrel craft. Take a toilet paper roll and apply a light layer of glue on it. Now roll the cylinder in sand. Let the sand stick on it. Shake off the excess sand from the surface of the toilet paper roll. Now cut out the shape of the head, ears, arms and feet from a dark brown colored sheet. Take a pine cone and clean it thoroughly. Now stick it at the back of the squirrel body as the bushy tail of the squirrel. Take some acorn. Fix one acorn in the arms of the squirrel. Take one acorn and fix it in the place of the mouth on the brown sheet. Cut out two squares from a white sheet. Stick two black circles in the middle of these squares. Now stick the squares as eyes for the sweet squirrel.

Origami is a great technique to make different animals. You can also make a sweet squirrel using the origami techniques. Use orange or brown based colored sheets for making a squirrel. You can learn squirrel making origami techniques online. Also add two dots, one on each side of the head to make the eyes of the squirrels.

These box folded squirrels are really fun to make. These squirrels look like humans. These are nice for toddlers to realize what a squirrel looks like. You can get these templates in 2D very easily in the market. Once you have bought a template, cut along the mentioned lines. Now start folding slowly along the mentioned edges and curves. As you keep on folding on the lines, the squirrels starts to take shape. Now use a glue stick wherever necessary to complete the squirrel craft.

If you have a spare brown colored hand glove, it is a perfect fit to make a squirrel. First of all lay the hand glove straight. Mark along the given lines on the hand glove. Cut along the given lines. Take the body portion. Sew along the fingers region. Now fill it with poly-fill. Sew at the base as well. Fill up the thumb and sew at the base and do the similar with the portions cut from the ring finger and the little finger. Now cut the region kept for the head, fill it with poly-fill and sew at the base. Add two ears to the head cut from the index and middle finger of the glove. Now sew all the regions together in the right places. Fill the portion of the thumb. Make a design using the white and black thread. Now attach the bushy tail to the back of the squirrel body. Make the features of the squirrel using colored thread. Your squirrel is ready to hop.

This is a very easy to make 3D squirrel craft. You can either get a template for this beautiful squirrel craft from the shop or make this at home. Take a hard stock sheet. Now draw a squirrel drawing on the sheet. Replicate this shape again and cut two such squirrel shapes. Now stick these two shapes at the inner edge and make a V shape. Join the bushy tails of the two squirrel together. The V shaped opening helps the squirrel to stand. You can also make some colorful acorns for this 3D squirrel.

8. A Squirrel with Acorn Using A Pipe Cleaner

These beautiful squirrel crafts are really easy to make. You can use these squirrel crafts as pillows as well. Start by making a drawing of the squirrels on the cloth. Leave a margin of two cm from the outer edge and cut along this outer margin. Make two such squirrels from the cloth. Now start sewing the two squirrel pieces together from one edge. Fill in the cavity with poly-fill when three-fourths has been stitched. Now completely stitch the squirrel end to end. Take two black buttons and sew them with a needle in place of the eyes. Also add a bright nose and black whiskers with needle and thread to this squirrel craft. Your squirrels are ready to adorn your homes.

10. Making A Squirrel Craft In A Paper Plate

Let us make a squirrel having nuts in a paper plate craft. First of all take a paper plate. Cut out a tree, its runk and branches from a black colored paper. Stick the tree inside the paper plate. Cut out small sized leaves from colorful paper and stick them along the branches of the tree. Make the details of the leaves using a black sharpie pen. You can also add nuts and acorn to the branches to further beautify it. Now make a squirrel on a sheet of paper. Color the squirrel and draw all the details on it. Now cut the squirrel out and paste it on the plate. Give an acorn in the hands of the squirrel for added beauty to the craft.

We all know that squirrels live on tree and love to eat nuts. Let us make a craft depicting exactly this. First of all take a hard stock sheet and make a rectangle in the middle of it. Leave a circle in the middle. Paint the rectangle like a bark of the tree leaving the circular region. Now let us make a squirrel. Cut an egg shape from a light brown colored paper. Add two small ears to the head. Add two circular black eyes. Make a small oval brown nose. Add thin strips of black on either side of the nose to make the whiskers of the squirrel. Stick the head in the circular portion. Add the shells of peanuts at the base of the tree bark to complete this squirrel craft.

12. Making A Squirrel Out Of Leaves

This paper plate squirrel craft is a perfect activity for the kids. Start with a full size paper plate. Cut it in an oval, flattening at the top and the bottom. Make a division in the middle of the plate. Color the top in dark brown shade and the lower portion in a skin color. The kids can use any medium to color the squirrel. Cut out two little ears from a sheet of paper and color them in dark brown color. Stick the ears at the top. Make two round eyes for the squirrel. Add a hit pink triangular nose and an oval shaped mouth made from a white sheet of paper. This squirrel is easy to make and looks pretty.

To make this 3D squirrel craft, start with a template to make a squirrel. Print out the template of the mouth, arms, legs, acorn, tail, etc. Cut out all the body parts from the colored sheet. Take a newspaper sheet and roll it into a pipe. Now flatten these rolls. Make a coil with these newspaper rolls. Make another such coil for the body of the squirrel. Now stick these two coils together sideways. Make the coils stand length-wise. Now stick all the previously cut templates to the coils in the front. Your sweet newspaper squirrel is ready to play with.

We hope you liked all these Squirrel craft ideas for kids. You can check out other related articles on K4 Craft. You can leave your valuable feedback in the comments section given below. We will come up with more such useful content for you soon. Keep smiling and creating with K4 Craft! 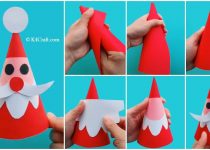 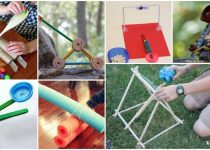 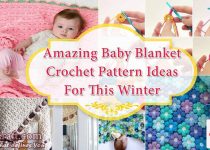